FISHING: Crappies on the Side 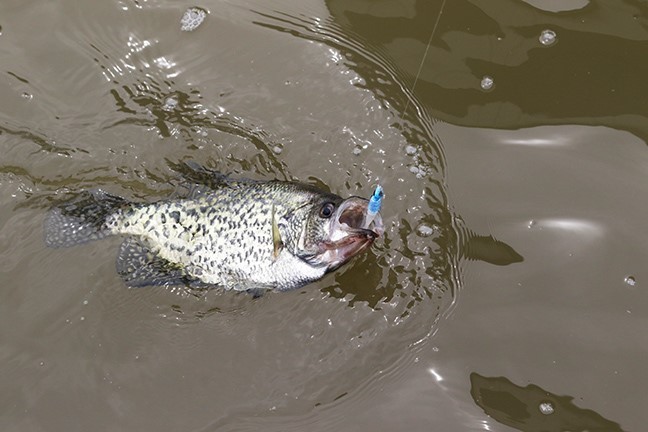 By David A. Brown
Fall is feeding time for predators of every flavor, and crappies are in full-on gorging mode; keenly aware of winter’s lurking. Knowing this, Seaguar and Raymarine pro Troy Peterson knows that finding the food means finding crappies. The fish are mostly suspended this time of year, but dialing in the likely bait-holding areas helps him narrow the search.

“We have a pretty big river system with the Wolf River (Wisconsin) and all the minnows, shiners and other baitfish are up in the rivers, scattered amid the timber, in some of the deep holes and behind dock posts,” Peterson said. “So we’re basically driving up and down the river, looking for giant schools of baitfish. They’re typically in the wood, whether it be brush or dock posts and the crappie are typically right behind them.”

Beyond the river scenario, Peterson says he employs a similar strategy for crappie on lakes where crappie will be pursuing pods of baitfish that are making a seasonal movement out of the weed beds. Expanding in size, these baitfish will be holding over deeper flats. 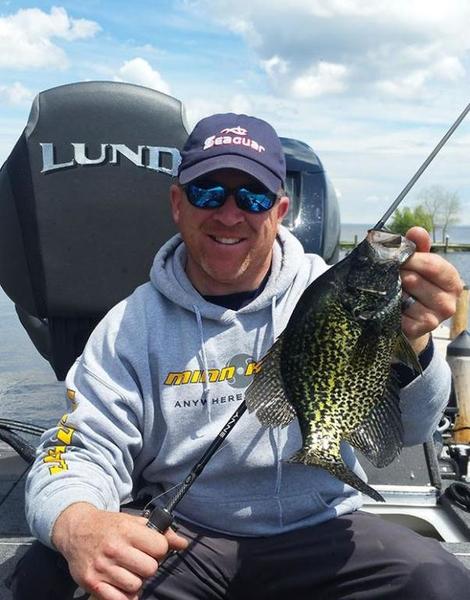 “It’s more of an afternoon bite,” Peterson says. “We’re just using the Raymarine DownVision to look for weed edges, brushpiles and cribs (artificial habitat features comprising a rectangular log frame dressed with brush and other accents). Crappies like to sit over wooded structure, making it easier to drive across lakes and reservoirs and make a grid to find out which cribs the fish are sitting on.”

As Peterson explains, local fishing clubs build these cribs to provide habitat in otherwise barren areas of the lakes. Typically weighted with cinder blocks, these fish attractors are dropped beyond the zone of natural cover. On many northern waters, a permit is required to introduce habitat, like cribs and brushpiles. Opposingly, on southern lakes and reservoirs, ardent anglers sink their own structure, refreshing productive brushpiles, as they erode over time. (There’s an Arkansas guide who has over 2,000 brushpiles marked on a single reservoir!) 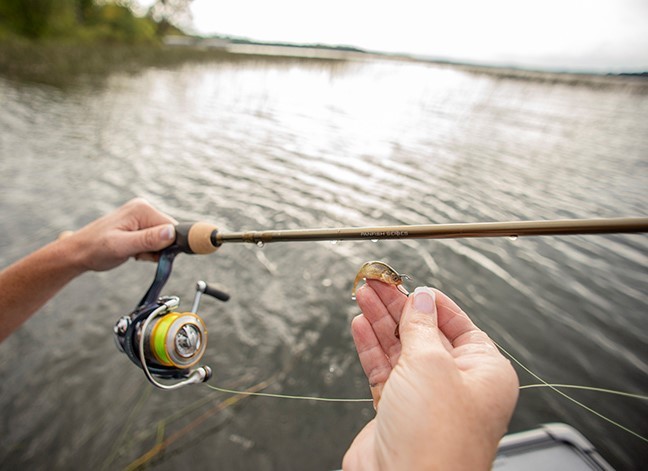 Oftentimes, all you need is a bucket of minnows to clean up on fall crappies. (Photo courtesy of St. Croix Rod)

With Raymarine Axiom Pro 12 and 9 units on his dash and an Axiom Pro 9 on the bow, Peterson lauds the crisp clarity of traditional 2D sonar and DownVision images. From a simple time-management perspective, this amazingly sharp detail allows him to immediately recognize what he’s seeing and respond accordingly.

“Raymarine’s signals are so clear that when you get fish suspending over deep water, you can almost count the minnows in the bait school versus a giant blob or who knows what.” Peterson says.

Also, Raymarine’s interaction with Navionics SonarLogging and SonarChart Live takes scouting to a new level. Particularly critical on previously unmapped waters, the ability to record and store what he graphs proves invaluable for open water pursuits, as well as ice fishing.

“This allows me to grid out a lake and create my own maps,” Peterson says. “I can find the deepest holes or the basin, I can find the sharp breaks, I can use SideVision to find and mark the cribs.”

Peterson runs a Raymarine Axiom Pro 12 on the dash and Axiom Pro 9 on the bow.

“When we’re ice fishing, we don’t have the ability to scan, we have to just go and drill holes and you have to be right on top of spots,” Peterson said. “That’s the beauty of using the SonarChart Live feature.”

“I’ve found that on certain types of water, you need to play with the settings a little more,” he says. “If you have murky water or really clear water, settings are a big deal. I’ll play with the contrast a lot to try and identify the types of species that are mixed in with the bait.

“We have walleye, pike and bass mixed in with these bait pods. Once you get good at it, you can determine the actual species of fish by the soundings you’re getting. Darkening up the contrast and increasing the gain a little bit will give you better definition.” 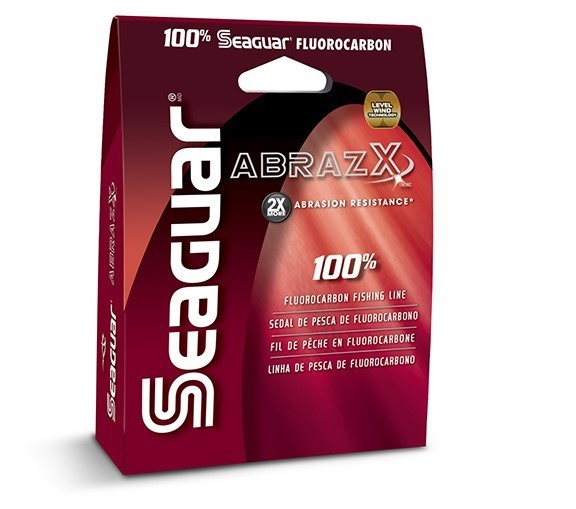 Once Peterson locates the crappie-friendly structure, he takes a simple, yet undeniably effective approach to tempting the fish. Inspired by old-school cane poling, Peterson equips uses a telescoping 14- to 16-foot pole rigged with 8- to 10-pound Seaguar AbrazX fluorocarbon to deploy a minnow on a No. 2 long shank Tru-Turn hook with a 1/4-ounce weight, all under a slip bobber.

“On the river system, crappies tuck behind brushpiles and vertical structure like dock posts and stumps, staying out of the current and just sucking in anything that gets eddied back into where they’re hiding.

“There’s nothing more effective than cane poling and dropping your bait directly on top of them without worrying about casting to them or feeding the line back. You want to get your bait as close to that vertical structure because eddies suck whatever they’re eating to the back side of that structure.”

As Peterson explains, the 1/4-ounce weight serves as an escort for his bait. Precision placement is the key ingredient, so he wants to know exactly where each bait goes.

“I want it to drop perfectly straight down; I don’t want any whip or resistance in that line,” Peterson says. “I want to be able to suck that bait as tight to the structure as I can, especially when I’m fishing really thick brushpiles. When I see a pocket on the screen, it’s really important to drop down in there quickly and get the fish out.” 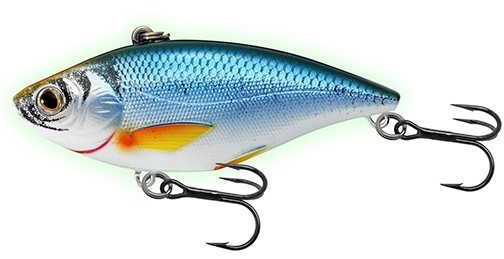 Now, if Peterson’s fishing more around docks in the river system, he switches to a tube or a craw tube presentation. Skipping or flipping works and he’ll match his jig head size to water flow.

Successful southern reservoir crappie masters will mark a brushpile, throw a marker, quickly back off, and make long casts with light jigs. 1/16th ounce is a standard, shifting up with winds and down with a still surface.

One particularly effective combination is a Z-Man Finesse ShroomZ jighead with a Z-Man ElaZtech Finesse ShadZ or Trick ShotZ. The inherent buoyancy of ElaZtech slows the fall, while the material’s durability stands up to fish after fish.

Crappies don’t leave the lakes, rivers and reservoirs in late fall. In fact, if you locate fish, there’ll likely be throngs of them. Look for wood structures on the edges of current and brushpiles positioned on points and breaks, and feed them live minnows, finesse jigs and miniature rattlebaits. You’ll be glad you did… 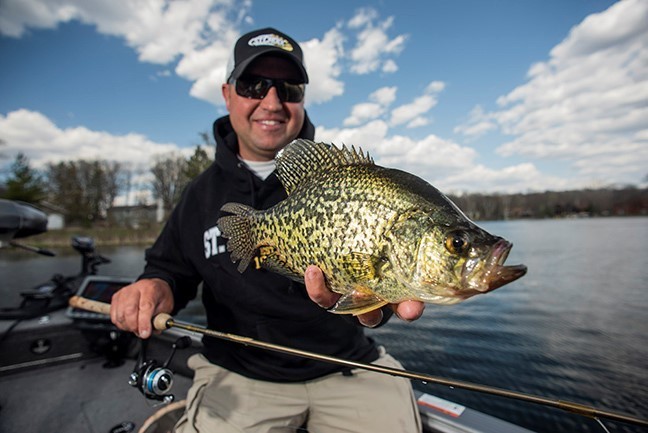