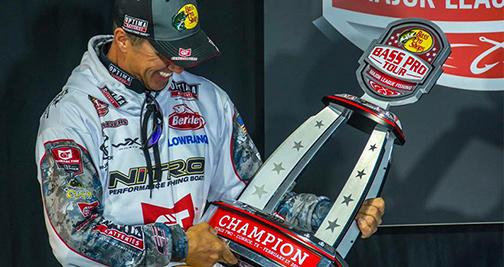 Evers used his Navionics HotMaps Platinum South map card, updating it right before the event kicked off to ensure he had the latest data available. During practice, he relied on Navionics maps to locate shallow, protected areas where he could escape the wind — and the crowd.

Evers describes the role of his electronics, "A couple things were key. With my Navionics mapping — I got it updated — you can really see the shallow areas, so you can differentiate between the bulkheads and the natural shoreline, which was really helpful. I was basically in search mode from the start."


Alone in the canal

Evers is no stranger to Lake Conroe, but even for a seasoned pro there’s always something new to discover. He scanned his maps and made his way to a canal that he’d never been to before. Oddly enough, he had the area all to himself. Sometimes a little luck goes a long way. Evers recounts, "I found out afterward that the area I fished was closed off due to dredging in practice and I didn't realize it because I didn't try to go in there in practice."

And that's how he had a spot to himself. With something special lurking in the freshly dredged waters.

With 10 minutes left on the clock, the final stretch of the competition was about to get interesting for Evers. After consistently pulling in two-pounders throughout the day, he held out hope for a pre-spawn heavyweight and threw a dropshot, a setup he always has rigged and ready on the front deck. He shares the secret sauce:

The stars aligned, and his strategy, location, and experience paid off — in a big, 8 lb., 1 oz. kind of way. Already at the top of the leaderboard, this final fish was enough to comfortably seal the deal with a 11-4 lead and a final total weight of 51-12.

We may be a bit biased about where Navionics fits in to the winning equation, but when asked Evers doesn’t hesitate, “Updating your maps is so important and I’ve proven that with this win.”

Learn more about daily updates and never miss out on the most current maps available. Own a Navionics card? Update your charts for only $49.99 USD through Feb. 28, 2019.
© 2021 Florida Fishing Forum