Misatt Rumble, James Bickerdike and Mark Blackman all from Cool by the Pool, a Sales ppy Day Today along with the Topshotfishing team for some deep sea sport fishing in Fort Lauderdale, FL.
Agency from the UK, were vacationing in Fort Lauderdale and decided to charter the Ha
The winds were out of the east at 5 mph, temperature was in the mid 80’s, seas running 2-3 ft. as the sun played peek-a-boo.

Fifteen minutes after leaving the dock, lines were in 120 ft. of water by the sea buoy in Fort Lauderdale, FL. If you venture off another Ľ of a mile, you will find yourself in 500 ft. of water, due to our extreme drop off.

We started off with two #8 plainers, one with a 3 ˝ blue reflector drone spoon and the other with a double hook pink and blue sea witch in front of a Bonito strip. For surface baits we went with two Ballyhoos and two Bonito strips. Our first fish was a Kingfish, and James was our angler, while Mark and Matt cheered him on. From there I headed towards one of our 34 artificial wrecks. Upon arriving, I took one engine out of gear so that the baits could sink down deeper – it paid off because Mark caught a 25 lb. Amberjack. I could see some birds working the area – east of Fort Lauderdale - so I headed towards the area. One of our plainer rods got a strike as the rod tip bounced up and down – a tell tale sign that it may be a Wahoo – Matt was our angler. Ten minutes later, Dave our mate, gaffed the jaw snapping Wahoo weighing in 26 lbs.

For a successful and adventurous deep Kingfish, one AJ and one Wahoo, it was time to head back to the dock at Bahia Mar sea fishing charter Fort Lauderdale FL for Sailfish, Shark, Bonito, Mackerel, Swordfish, Snapper, Wahoo, Tuna, Mahi Mahi and Grouper contact Captain Zsak. - 954-309-7457 or email us at tzsak@bellshouth.net Website: www.topshotfishing.com 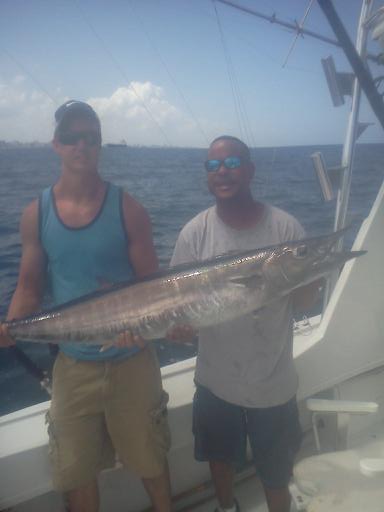